It seems too good to be true but the news is that West Ham United have signed Carlos Tevez and Javier Mascherano from Corinthians. 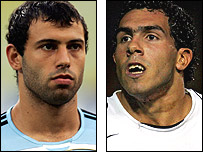 From The Guardian: “The move is nothing short of sensational: never before have two world-class players yet to reach their prime – both are only 22 – rejected a host of elite clubs in order to join a middling one. However, while it true that West Ham are on the up with Alan Pardew at the helm and exciting talents such as Anton Ferdinand, Yossi Benayoun and Nigel Reo-Coker .

It is unquestionably a major coup for Pardew and gives last season’s FA Cup runners-up one of the most impressive-looking squads in the Premiership.”

This entry was posted on Thursday, August 31st, 2006 at 12:48 pm and is filed under Football, Funny. You can follow any responses to this entry through the RSS 2.0 feed.